THE CHACMA BABOON - THEIR EYES ARE SMALLER THAN THEIR NOSTRILS 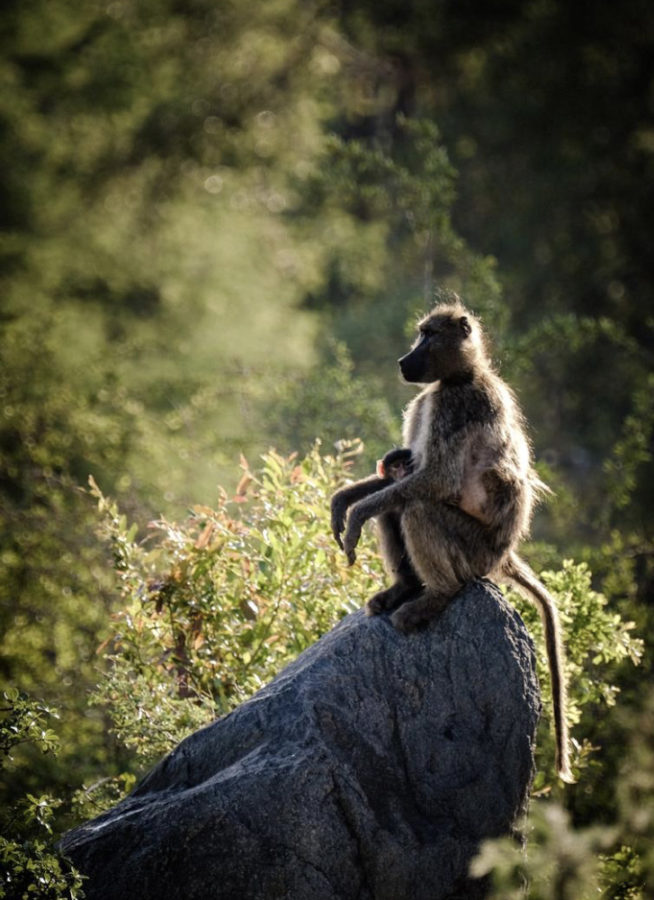 It is difficult to take yourself seriously in the presence of a baboon, but I have tried. The university I attended is at the foot of Cape Town’s Table Mountain and every now and then a chacma baboon or several would clamber down to our world

There they were: on the avenue that bisected the campus, where a highly evolved professor parked his vintage sports car. Where film students arranged themselves on windowsills. There were people trying to take themselves seriously all over the place. It was like every university. Only here, we had baboons

After my third-year philosophy exam, newly and involuntarily single, I walked to the bus stop, trying to look just the right amount of sad, detached and fetching. My feet were wet – the students who attend the University of Cape Town do so, for most of that city’s rainy winter, with soaked feet – and in front of me, next to a rubbish bin, was an enormous baboon. In its flat, miniature hands was a large bag of sugar with a hole in it. The baboon’s eyes were smaller than its nostrils. It stared, philosophically, somewhere behind me: a malevolent pastry chef contemplating his next creation, as the sugar poured onto the ground

Baboons are from the “old world monkey” family, more closely related to apes – and to us – than “new world” monkey

The most famous chacma in Cape Town was Fred: he could, and did, open car doors. There are many photographs of him, but the best are where Fred is eating. He was never so happy as when he was sitting in the back seat of a stranger’s car, his mouth filled with more fruit than he could chew, looking as though he was holding forth at a painful lunch. He was eventually euthanised for his boldness

In The Soul of the Ape, South African nature writer Eugène Marais recounts the three years he spent watching the same family of baboons living in the Waterberg

They lived 30 metres from the floor of a gorge, at the mouth of a cave sheltered by a giant wild fig tree. “Occasionally a big male would wake the echoes of the mountains with his tremendous voice,” Marais writes

Marais was often depressed; in the book, he set out to show that the chacmas experienced something like depression, too

“In few phases of behaviour did our troop of baboons appear to us more human-like than in the unquestionable expression of … ‘evening melancholy’,” he writes

At sunset, the baboons would grow quiet, and huddle in groups. “And then from all sides would come the sound of mourning, a sound never uttered otherwise than on occasions of great sorrow – of death or parting.”

“In the presence of these proofs, it is hardly possible to avoid the conclusion that the chacma suffers from the same attribute of pain which is such an important ingredient of human mentality, and that the condition is due to the same cause,” he writes

When they weren’t being the saddest animals on earth, they were digging small trenches on the side of a hot spring – the water would run into the trenches and cool until the baboons could drink it – or ripping out the stomachs of sheep to reach the curdled milk within

Baboons get a different vibe when they observe us. Anticipating feeling embarrassed for one earnest actor or another in a very serious play – that is how the old world apes feel about people. They look away quickly, staring, philosophically, anywhere but at the humans: they cannot bear to watch

“The Nature of … ” is a column by Helen Sullivan dedicated to interesting animals, insects, plants and natural phenomena