LEOPARDS AND THEIR CUBS - THE ULTIMATE SIGHTING? 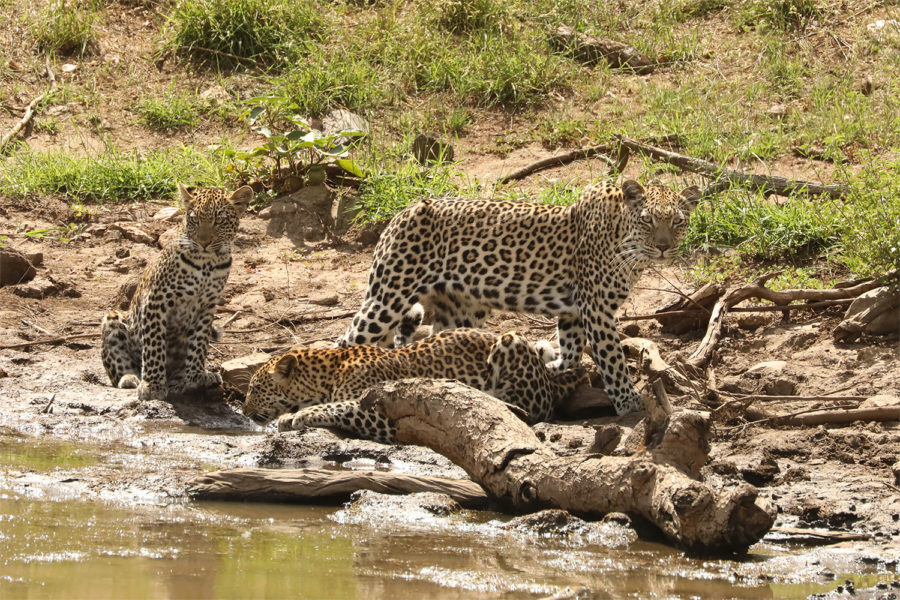 When leopards come together to mate it is an intense affair lasting 2 to 5 days with copulations occurring every 5 to 10 minutes. And if you have ever had the privilege of hearing the accompanying sounds…. well they are a little crazy! Fighting hippos, warbling warlocks, a Star Wars soundtrack comes to mind…..

Females are extremely flirtatious even leaving their own territories to actively seek out a male or calling and marking incessantly to attract one. They will attempt to mate with many males as possible in the area so as to trick the males into thinking that the future cubs belong to them, which leads them to tolerate the cubs and indirectly protect them.

Male leopards will kill the cubs of any female leopard that they have not mated with, as they do not tolerate the perpetuation of the genes of another male. By killing the cubs, the female shortly comes back into oestrus allowing that male to mate with her and perpetuate his own genes. A female will still mate with a male that has killed her cubs as she ultimately would have identified him as a dominant male through that act, and would find it in her best interests to mate with him.

Gestation is rapid (100 days) and cubs are born relatively undeveloped being completely helpless and blind (altricial) and only weighing between 500g – 1 kg. Female leopards cannot afford to be weighed down by a heavy pregnant belly as this would affect their hunting ability. Instead cubs continue to grow in secret hiding places for about 6 weeks and are suckled by the female for 3 months. Mom will have a few different dens in an area and will move her cubs from one to the other every 2 to 3 days to throw potential threats off their trail.

Leopards will leave their cubs secreted away in dense bush, up a tree, in rocks or old burrows while they hunt for food which they will then lead their offspring to. However if she is unsuccessful, cubs may be left alone for up to 6 consecutive nights which makes them highly susceptible to death from starvation or predation. They will do this until the cubs are about 9 months old and after this time cubs will start to accompany their mother on hunts, executing their first kill at around 11 months old.

However there are many many varying reports on ages of cubs both accompanying their mom (from 4 months) as well as making small kills of their own (from 5 months) in the leopard rich areas of Sabi Sabi and Londolozi.

Leopards cannot fend entirely for themselves until they are at least a year old and their mother will accommodate her cubs within the borders of her territory for at least 18 months and sometimes longer. She will still tolerate hunting visits by newly independent sub adults which may not immediately be able to set up territories of their own.

If a female is successful in raising cubs in a particular area she will return to that same area time and time again. Agwe and her now sub adult cubs, Bastet and Chuku (pic above), are seen regularly around Pebble Loop Dam so hopefully we see many litters from Agwe in this area in the future.

Sadly leopard cub mortality is extremely high – between 35 – 90% – so to see these 2 raised successfully thus far is extremely rewarding.